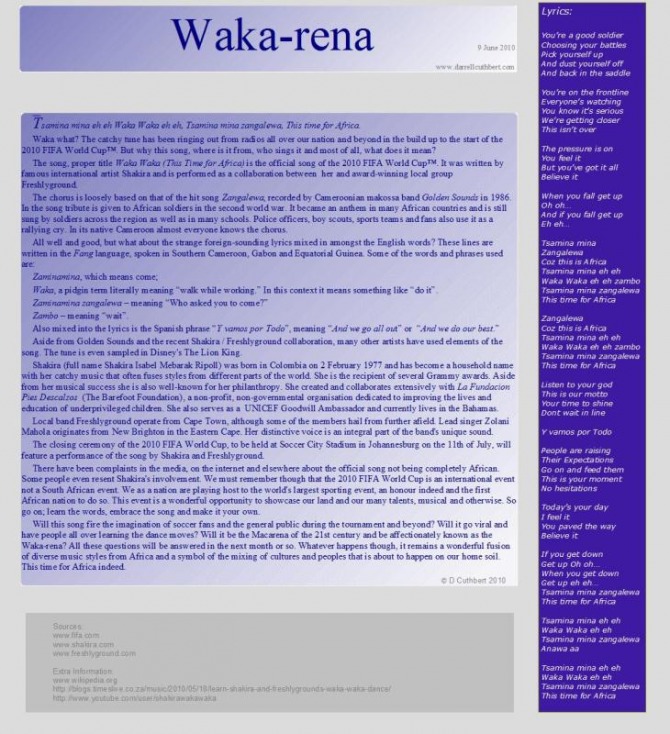 Tsamina mina eh eh Waka Waka eh eh, Tsamina mina zangalewa, This time for Africa.
Waka what? The catchy tune has been ringing out from radios all over our nation and beyond in the build up to the start of  the 2010 FIFA World Cup™. But why this song, where is it from, who sings it and most of all, what does it mean?
The song, proper title Waka Waka (This Time for Africa) is the official song of the 2010 FIFA World Cup™. It was written by famous international artist Shakira and is performed as a collaboration between  her and award-winning local group  Freshlyground.
The chorus is loosely based on that of the hit song Zangalewa, recorded by Cameroonian makossa band Golden Sounds in 1986. In the song tribute is given to African soldiers in the second world war. It became an anthem in many African countries and is still sung by soldiers across the region as well as in many schools. Police officers, boy scouts, sports teams and fans also use it as a rallying cry. In its native Cameroon almost everyone knows the chorus.
All well and good, but what about the strange foreign-sounding lyrics mixed in amongst the English words? These lines are written in the Fang language, spoken in Southern Cameroon, Gabon and Equatorial Guinea. Some of the words and phrases used are:
Zaminamina, which means come;
Waka, a pidgin term literally meaning “walk while working.” In this context it means something like “do it”.
Zaminamina zangalewa – meaning “Who asked you to come?”
Zambo – meaning “wait”.
Also mixed into the lyrics is the Spanish phrase “Y vamos por Todo”, meaning “And we go all out” or  “And we do our best.”
Aside from Golden Sounds and the recent Shakira / Freshlyground collaboration, many other artists have used elements of the song. The tune is even sampled in Disney's The Lion King.
Shakira (full name Shakira Isabel Mebarak Ripoll) was born in Colombia on 2 February 1977 and has become a household name with her catchy music that often fuses styles from different parts of the world. She is the recipient of several Grammy awards. Aside from her musical success she is also well-known for her philanthropy. She created and collaborates extensively with La Fundacion Pies Descalzos  (The Barefoot Foundation), a non-profit, non-governmental organisation dedicated to improving the lives and education of underprivileged children. She also serves as a  UNICEF Goodwill Ambassador and currently lives in the Bahamas.
Local band Freshlyground operate from Cape Town, although some of the members hail from further afield. Lead singer Zolani Mahola originates from New Brighton in the Eastern Cape. Her distinctive voice is an integral part of the band's unique sound.
The closing ceremony of the 2010 FIFA World Cup, to be held at Soccer City Stadium in Johannesburg on the 11th of July, will feature a performance of the song by Shakira and Freshlyground.
There have been complaints in the media, on the internet and elsewhere about the official song not being completely African. Some people even resent Shakira's involvement. We must remember though that the 2010 FIFA World Cup is an international event not a South African event. We as a nation are playing host to the world's largest sporting event, an honour indeed and the first African nation to do so. This event is a wonderful opportunity to showcase our land and our many talents, musical and otherwise. So go on; learn the words, embrace the song and make it your own.
Will this song fire the imagination of soccer fans and the general public during the tournament and beyond? Will it go viral and have people all over learning the dance moves? Will it be the Macarena of the 21st century and be affectionately known as the Waka-rena? All these questions will be answered in the next month or so. Whatever happens though, it remains a wonderful fusion of diverse music styles from Africa and a symbol of the mixing of cultures and peoples that is about to happen on our home soil. This time for Africa indeed.